looking ahead to 'nysta #6: sea of revenants' and beyond 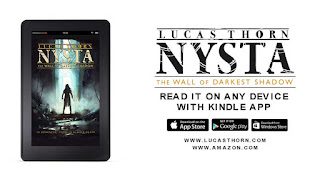 Nysta #5: The Wall of Darkest Shadow is done. No more edits can be made, and the book is calmly waiting release on the 24th. So far, I've been overwhelmed by the number of pre-orders. Every book seems to do better than the one before in that regard.

I hope this means you're all enjoying the stories!


Normally what I've done at this stage is rest. Sit back and put my lazy feet up and wait to see what happens. This time, however, I'm too motivated to write the next one because: vikings! Pirates! Raiders! All three!

I've had this story in my mind since the beginning. When I was writing the first Nysta draft, this was one I toyed with. The difference between that draft and this one, however, is the nature of the pirates. Originally, they were more European. Much more like the kinds of pirates you can imagine when you think of the word. And their pirate town was pretty much what you'd expect. Ropes and wooden bridges and swinging things. A shanty town made of upended and castaway ship parts (see what I did thar?).

But since then, a lot's changed. For started, Pirates of the Caribbean happened. So, if you combine draug of the sea with pirates, you essentially get the first movie with Nysta as Johnny Depp. And that would be bad. I was forced, then, to reconsider my options and decided to instead go with the idea of raiders as owning the scattered islands of the Crossbones archipelago. Raiders drawn more from the idea of seasonal vikings than fulltime pirates. They could then be a hearty mix of trader, farmer, fisher and fighter.

It also means I get to keep the more "northern" feel I've been working with for a while. I don't want to be solely viking or Scandinavian in any way. I want the Fnordic Lands to feel very haphazardly anarchic. A collection of all kinds of people from all kinds of places and cultures. It's why the idea of pirates originally appealed to me. And why vikings almost do the same. They had a tendency in history to colonise as much as raid. Vikings, then, have more opportunity to be thought of as wanting to better themselves and find new lives. Their goal was to provide for their families and invest in their own future. It fits very well with the overall ideals of the Fnordic people.

An added bonus is I get to do a new music list.

With every book, I make myself a list of songs to inspire me while I write. It helps to keep a single "feel" overall and gives me atmosphere when plugging away. Often my lists are punk. One was more folk-punk, with heavy leanings into Dropkick Murphys. My last book, The Wall of Darkest Shadow, benefited from the happy joy of psychobilly.

This one, though, is getting a whole new feel. I'm going with a playlist which consists of metal from viking and folk-themed bands such as Sólstafir, Einherjer, and Korpiklaani. Add a touch of Finntroll and Ensiferum into the mix, and you can pretty much see where I'm heading with this. Mostly atmospheric black metal with clean vocals. I'm not fond of the growls as much. Some think I'm weird, but I'm just fond of hearing the vocals even if I don't understand the language.

I've written the first four chapters and, so far I'm happy. Like my playlist, it's pretty much the same action you know (and hopefully love) combined with a touch of Lovecraft to add some colour. It should be exciting as Nysta learns the secret which has kept Rule's army from sailing onto the shores of the Fnordic Lands.

Also, for those of you who read this far: zatodeathpriest.