the shivs: a mouthful of filth now available for pre-order 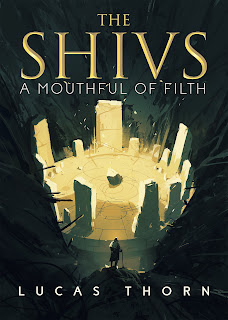 It's the tenth book in the Shadow Realm series and, as such, I wanted it to be a real blast. I also wanted something which will help hook into the next arc of Nysta's story as the Fnordic Lands slowly begins to unclench and let its secrets bleed to the surface.

One of those secrets is buried in Dragonclaw, and Filth has stumbled on it. There's a lot of things he could do. He could turn around and forget it. He could sell it. Or, he could use it to get seething bloody vengeance on those who've wronged the Shivs.

I wonder what he'll choose...

The cover for this book was beautifully designed again by Amir who has made a simply stunning image. I originally requested only that the cover included the stone platform on which a megalithic stone circle had been erected. He gave me something which almost looks like a glowing crown and this suits the story in so many ways.

I wrote this book in the last part of Feb and early March. I had hoped to deliver it in April, but scheduling commitments made it impossible to have the cover ready. I then got busy on the sequel to my Fel Queen series and have now completed that story before coming back to finish editing the Shivs in time for a release in May.

On starting my first round of edits, I was surprised to find very little in the way of anything I wanted to change. I'm actually happy with it as it is. It's got everything I wanted. A spicy humour, plenty of action and violence, a gang of rugged individuals with their own differing personalities and ideals, and a HUGE step toward unveiling some of the mysteries at the centre of my series.

In terms of what helped inspire this, I'd have to say Andy Remic's Iron Wolves was a definite inspiration. I've always been a fan of Angry Robot, and felt Iron Wolves deserved a lot more attention than it got.

I was also obviously influenced by several Japanese movie heroes, including my favourite Zatoichi films. While there's no blind swordsmans, the overall concept of the slender cane sword is something I greatly enjoy. Especially as in Europe, it was a gentleman's weapon. A slender blade inside a cane. This is something I feel Filth would greatly use as he's not particularly fond of rich people, I think. He'd use it with a degree of mockery.

I wrote this book without puns. There. I said it. The reason I chose this route was there's more humour in the characters themselves so I didn't think the puns were necessary. I felt they'd only get in the way. It's a decision I'm unsure of, but also feel that Nysta's sense of humour is better served as her own and kept distinct.

For those of you hoping for a Nysta book, please know this does fit the order of the series and is important over all. It saved me having to cram it into her books. I prefer keeping her stories about her, without splitting it up over dozens of people. Also, I'm expecting to have a Nysta book ready for you around October... Isn't that fun?

In the meantime, enjoy a filthy story of filthy characters engaged in filthy business and Pre-Order now for May 25th!


Then Pre-Order your copy now only on Amazon...