the shivs: a mouthful of filth - a little background 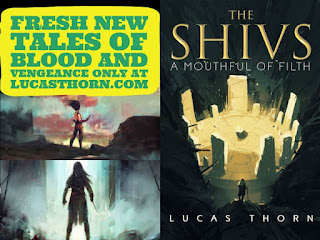 When I finished writing Scion of Dragonclaw, I was a little disappointed with how much I hadn't been able to include. I had envisioned the Dragonclaw mini-trilogy as something of a tale about the gangs of the Fnordic Lands. A way of telling the near-tribal culture which exists there.

Unfortunately, Nysta chose her own path (as she always does) and struggled to fit in. Which meant I never really got to focus on the Shivs in this book as much as I wanted to.

I started writing the next Nysta book, but couldn't really get out of my mind how much fun the gangs could have been if only Nysta had been more sociable. So, I started a short story and it turned into a book.

I began with writing a story about a young boy called Filth. He had just lost his gang and was looking to start one of his own. I had him meet up with Mocker and Creed and the young boy began to grow his little army. I made it about fifteen chapters in before I threw up and threw it out. It was boring me.

So, I made him older. A handful of years before he met Nysta. Enough that his gang is still fairly young, but has already made its mark, albeit a small one. He's on the cusp of becoming something truly great, when something gets in the way and he needs to recoup and recover. And, because this is the Shadow Realm, get revenge...

Writing this book, I knew I wanted to add more characters than I normally juggle. This is something I consider to be my weakness. I'm not very good at multiple character arcs. I prefer to focus on one point of view. But I knew I had to capture the gang dynamic as best as I could.

At first, I was thinking of a trio. I thought of using Filth, Mocker (a musclebound tank), and Ellz (fighter with no off-switch). But then realised people loved Klista, so she'd need to come back. And then I thought she should have a few friends. So, we got Shithead and Fuckface. Or Shitface and Fuckhead, depending on her mood.

There's a scene in the Hobbit books where the dwarves are showing up for breakfast in pairs. I always found that kind of amusing and it's a great way to begin an introduction of many characters. So, I stole the concept. But in stealing it, I had to add a few more characters. In this way, you got Headpunch (the ex-guard of the Wall) and Dalz (hero-worshipping sidekick). Druze and Maze (joined at the hip fighters) and Sour (off-tank) and Die (ageing rogue). This felt perfect and pretty much formed the guts of my book.

Of course, it meant balancing characters in a way I've never done before. I wanted to give everyone something brilliant. Which meant taking inspiration from westerns and samurai films which do this brilliantly. I had, of course, the gang movie The Warriors in mind, but not as much as you'd expect. Much of my concept for gangs in this series is simply the idea of bands of men and women sharing similar interests gathering together to survive.

They came to play.

I hope you enjoy this little offering. It was a book I greatly loved to write, and I'm proud of what I achieved with character balance. I loved these characters a lot. Also, this book marks a huge turning point in the Shadow Realm series. Because of my genuine love of this murderous band, I ended up giving them a serious part to play in the future and that part is well-telegraphed here.

You'll get more of it in The Shadow Realm #11 when Nysta returns.

Don't forget to say hi on Twitter or Facebook, and let me know what you think! Reviews on Goodreads and Amazon are clearly welcome, and if you've got a site of your own, hit me up.

As always, if you feel my books are cheap (they are!) for what you're getting and would like to offer more encouragement, drop a few bucks in my TipJar and I'll love you forever. Or at least keep writing...


Read the Prologue for Free

Pre-Order The Shadow Realm #10
The Shivs: A Mouthful of Filth