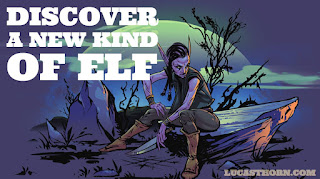 Yesterday, a face presented itself which actually surprised me.

May 30th marks the 6th anniversary of the official release date for the very first book in the Shadow Realm series, Nysta: Revenge of the Elf.

6 fucking years! How the fuck have I lasted this long?

When I first started, I dreamt of writing the series for a long time. I knew I wanted it to be a long series. But 6 years? I thought people would have gotten bored of her long ago. Thought I'd have, like, a single lone reader orbiting a far-off sun. Instead, Nysta is growing.

I still have so much to look forward to, with an illustrated version of the books coming soon, and another Nysta story this year. But this is a chance to look back and tell you I'm very grateful for the support I've had along the way. In particular, I'd like to thank those of you who say hello to me on Facebook or Twitter. I can't tell you how inspiring it is for me to know that someone has enjoyed my nasty little creations. It keeps me going during those times when I ask myself if it's financially worth it given how much time writing takes out of my life.

And then there's the people I've worked with. Amir Zand, Lente Scura, Alexandru Muneanu, Jason Deem and now Christopher Spence. These artists have worked to really push the visual elements of my world for me. Without them, I feel my characters wouldn't feel as alive. The whole product of my books wouldn't as full.

I remember my father once snidely pointing out that I have never finished anything I've started, and here I sit with 12 books under my belt and two more written and waiting to release. My 13th is out now (the 10th in the Shadow Realm series) and it just feels like I could keep bringing the violence.