the shadow realm - a reflection on writing 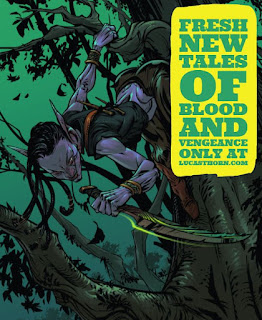 The Shivs: A Mouthful of Filth will be my 10th book in the Shadow Realm series. This is actually an amazing thing if you know me as a person.

You see, one thing I wasn't really good at was finishing things. I've started so many new hobbies and projects over the years that my house is mostly a junkyard of incompletes.

But this series was different. It consumed me. And, with each new book, it consumed me some more. The character of Nysta has evolved from a simple little thug to an epic little thug and in evolving has stolen my life.

Conan Doyle hated writing Sherlock. Other authors often kill their main character because they get sick of having to write them. Me? I love Nysta. She's everything to me as a writer and this world I am building was built solely for her to play in. I write every new book with glee. And, instead of getting harder, they get easier.

Having said that, the thing I've noticed is how I feel more confident to write with multiple characters. It was an area I used to feel was a weakness of mine. Perhaps it still is. But I forced myself, first with When Goblins Rage, to put Nysta among more and more characters. To test her personality.

With Scion of Dragonclaw, I was proud of how she interacted with other characters, but also of how they worked among themselves. I felt the book was more alive than any other I had written. The characters all had lives of their own, and I like to think my readers found them interesting for more than just their deaths.

With The Shivs, I knew I wanted to do something similar. I wanted to test myself with juggling a gang of characters. Having them work among themselves with their own personalities and plans. Their own dreams and doubts. Using the lessons I learnt with Scion of Dragonclaw, I tried so hard to tell a story which would give all characters their moment. It's my version of The Avengers.

Or Guardians of the Galaxy?

Either way, in The Shadow Realm, this is a Marvel epic. At least, that's what I was aiming for.

Klista was really popular from Scion of Dragonclaw, and I decided to bring her back in for this book albeit as a younger version of herself. Now, you might expect to see her go from frail little urchin to overpowered hero, but that's not how I work. Instead, you'll get what I hope to be a look at how groups remain cohesive in times of struggle against more powerful forces than their own. And the depths to which they'll go to achieve the impossible vengeance they thirst for.

To do this, I had to really pin each character's personality and work on giving them their own spin on loyalty. It tested my writing ability a lot. But, ultimately, every character shines in their own way so were an absolute joy to juggle.

My writing style is one where I pull pronouns from sentences and break sentences into fragments. I like to pretend there's a poetry in violent action and this has defined everything I do. But this removal of pronouns can make it difficult to juggle a large number of characters. Especially during dialogue scenes. I had to really work to keep my style and not fall victim to endless description during dialogue.

Did I create a cracker of a novel for you to enjoy?

I fucking hope so.

Pre-order it now and let me know if you like it. Shout out on Twitter or Facebook. And, as always, if you think it's too cheap for a book (man, cheaper than coffees here in Melbourne), then there's my TipJar and I'll be endlessly grateful.

And don't forget to share my work with your friends. Us Indie Authors really struggle to be seen as more than just a bunch of self-loving hacks. We want you to discover our stories and enjoy them.

Don't let us die alone in the dark.