cover art and the superclown 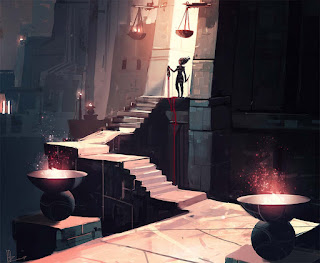 The other day, Amir was kind enough to share this amazing Werble of Scion of Dragonclaw.

When I was looking at it, it got me thinking about the fun of cover art sourcing.

Those of you following me know that I had originally found a cover artist for my most recent book, The Satanic Brides of Dracula, but then I accidentally wrote the whole thing in three weeks at the beginning of December.

I had originally expected an April release date, but figured I really liked it as it was, so why not release it? The only thing was, the artist I'd been talking to was only available in Feb. This meant I needed something quick.

Lucky for me, I found Lente Scura. But it was getting very tight there, and I nearly put it off for the original April release. Which was a bit depressing.

It's not that I didn't have opportunity. I think there's dozens of artists I could have used. But I wanted something perfect. And, with short notice, that's usually unobtainable.

I'm also in the process of getting maps. I'm just sorting the financials first, and then I'll share who I've got, because it'll blow your mind. Maps, to me, are characters and I wanted it to be just right. For that reason, I haven't had any done other than the joke of a map I made for giggles.

What I'm getting at is that the cover and associated art is so important, you should always get the best person you can and pay whatever they want you to pay. When I look at Amir's covers, I never think of the money I paid. I never do. I think of the amazing art and how beautifully it captures my world.

Seeing Lente's cover excites me, too. I look at them both and just want to write more.

I write this because I've been asked a few times about artists and listened to the reluctance from writers to pay for a decent artist. They think their friend has an art degree and can sort of photoshop something up and they regurgitate a photo done by their 12-yr old son with his iphone.

It's fucking atrocious and always makes me think of bad poetry compilations which have photos of a fucking island or something when all the poetry is actually about starving children or whatever the fuck.

Respect your writing. Respect the artist you work with.

That's, I think, the best I can give you and also the end of my rant.

TL:DR - how fucking AMAZEBALLS is this little movie?