prologue to the mad bride of the ripper

I have deeply enjoyed writing the sequel to The Satanic Brides of Dracula. For me, it's been largely a nostalgic journey as I remember the nights spent watching midnight horror marathons of old 50s-70s horror films.

In the late 90s, I used to run a few blogs where I reviewed horror films. Mostly Indie Horror Films. What ended up more or less depressing me was the influence Wes Craven had on the genre, which left it stuck in a murk of slasher/parody. I missed horror which were monster films where the monster had a streak of recognisable humanity.

Slashers turned monsters into silent soulless voids with no real personality. Their personality was entirely a uniform. A mask or a gimmick such as a quick one-liner. There was nothing exciting about them.

Rise of the Fel Queen as a series revels in the villains as people, possibly to the point of being cruel. This book, dealing with Jack the Ripper as it does, continues the cruelty. Perhaps adds to it from the previous book.

I was torn between making Jack the Ripper too human, which would diminish (in my opinion) the historically accurate abomination of his acts. I didn't want to do that. Nor did I want to glorify them. It was a difficult line to tread, and one I tried to think carefully about. Including the Angel-maker as a character only dialled that difficult path up to 11.

I hope you take this series in the spirit it is written. A tasteless homage to an exploitative genre which threw all sense of morality out the window in an unapologetic effort to entertain the sadistic corner of our psyche which loved to see others suffer.

And, as has become my tradition, here's the prologue to Rise of the Fel Queen #2: Mad Bride of the Ripper! 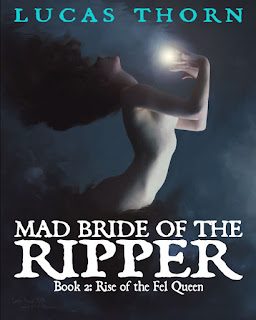 Pre-Order Mad Bride of the Ripper
Only at Amazon