illustrating the future of nysta and the shadow realm 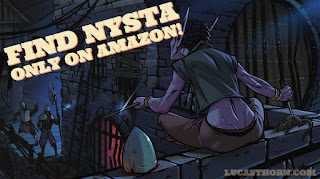 NEWS TIME! Hey everyone! There's incoming news on the next book in the Shadow Realm series and I'm hoping to give you a firm date anytime soon. It should technically still be May.

I'm also in the process of working out a nice schedule and format for the series in PAPERBACK. These have been promised for a while, but I really didn't want to do them until I was sure they were worth buying. I mean, let's all admit that us Indies are not always worth paying for in paperback as it's an expensive format and there's always plenty of traditional authors we want to spend our cashes on.

So, to make it worth your time, I've got two nasty ideas.

First, I'm going to put in some extra material at the end. You'll be getting short stories, possibly some cut scenes (yes, these are a thing!), maybe a look at early drafts. Possibly an essay (I haz that skillz). That kind of thing. A bit of a background to the world and characters involved. Just a lot of things which aren't in the ebooks for reasons it's usually not worth putting them in as not many people go beyond the point of "the end".

Secondly (and more excitingly), I'm looking to add illustrations! I wanted something like the old pulp magazines. Something sketchy, yet perhaps a little comicbook (like the Weis-Hickman Dragons series if you were lucky enough to remember the little drawings added in them). I have made contact with an illustrator and I'm really hoping that works out (everything positive so far - just discussing the terms before announcing names). I'll also include the maps!

Essentially, I'm working to create a nice pretty package for you. It's part of a big shake-up of my series as I try to genuinely overhaul my brand over the next year.

I hope for those of you who still like the paperback thing, that this interests and excites you. I know I'm bouncing in my chair like a *insert NSFW metaphor into statement*.

If you'd like to help make this a reality, please don't forget I have a PayPal donation TipJar and everything you give will now be going towards that! Let me know you donated, and I'll even name a Nysta victim for you!