the evolution of the nysta series 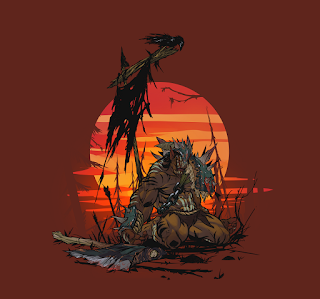 Attention, my glorious horde of undying faithfuls. Over the last few months, I've been looking at avenues to boost myself in the overall public domain.

I've thrown myself at the mercy of Mark Lawrence's Indie Project, SPFBO. And that went well, though it's fairly obvious I don't quite fit in with normal fantasy. I'm a little too punk for that. And that's okay.

In the future, I'd like to try a Patreon service. But I really want to make it worth it. I want to give something that really makes it rewarding because, ultimately, I don't feel having a sneaky peek or something at my work is exactly rewarding enough. I feel there's a lot more I could be offering to be worth your support.

Some of the ideas I'm working on involve the usual things such as extra contact and answering direct questions about the books (although, technically I'm happy to do that here anyway, so I didn't think that was an added bonus), and some participation in future books. I mean, there's sometimes forks down which I can travel. At the end of the Dragonclaw trilogy, for example, I can either tell the next story in the Nysta series or there's a distinct possibility I can give you a Chukshene book (he's actually due for one around then), or the next in the Hemlock (which will fit in okay then, though I might normally leave it until a little later).

Also, I'd love to write a literal ton of short pieces. Similar in format to how I do the Prologues and Epilogues, these will give added depth to the series and provide you with some background on characters you might not have had before. One terrific example is a story involving what happened to Nysta's goats. I mean, what did they do? This haunts me at night...

Having said all that, there's a lot of room for more exciting and tangible benefits I was hoping to offer. I feel that the biggest issue a writer faces is our books can often only be read once. Many times, you wouldn't read them again. They're also not something you can put as a background on your PC, or easily show off to your friends.

But you CAN show off merchandise. I was hoping, then, that what WOULD interest you is offers of merchandise. That is, mugs and shirts (sent to supporters). I also know a place which can print me up some bulk bookmarks (I know, pointless with ebooks) which are made on canvas and are extremely high quality. Amir Zand's art would look amazing on those.

I have also begun commissioning for character studies! This is the most exciting part of this post for you. I want more art for my website, this page here, and merchandising possibilities. Amir is working on some characters right now and I have also sourced another artist to drop through some which have a very 70s Pulp fantasy comicbook appeal. The artist I've attached like a leech to is named Alexandru Munteanu (Andy Weasel) and his work is amazing. Some of you may have seen the image I posted on my Facebook and Twitter feeds a week or two ago and wondered why I did that.

I will use the art mostly to illustrate stories and provide bonus eye candy to my work. I hope this kind of thing will add to the value of a possible Patreon service. Much of what I have will always remain public, but I feel I could give this story a lot faster if I can find a way to work on it more than I do my day job. I hope this doesn't seem very mercenary of me.

To show you how hard I'm working to provide value, I'd like to share the following first Character Image. This one is by Andy and is of Rockjaw. It is made as an illustration to Rockjaw's soon-to-come short story which will give an accurate and hopefully poignant background to why he is what he is. Though he explained it in a few quick rushed sentences to Lux, there's always room for a snapshot of his life, I think.

I'll put up a few stories on my site over the next month or so and if you get time, I'd love to get your feedback on whether you find them interesting or valuable.

This image comes in two flavours, but for now I'll give you the amazing coloured version. There's another version I have which has been made specifically with the idea of shirts in mind.

It's the first in a series of images from some extremely talented artists with very different styles.

I hope you drop your jaws like a rock at the sheer intolerable AWESOMESAUCE.