revenge of the soup 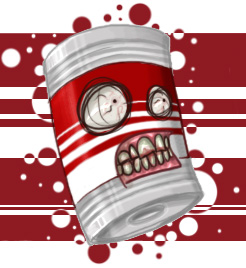 i was on my side as the kid stuck his boots in.
i tasted blood and gritted my teeth and tried to curl up inside my arms as though they might somehow spread out like an iron coat and protect me from the kicking.
"where is it?" he screamed. "give me the fucking money!"
"in . . . the . . . box," i croaked. "it's in the box!"
the kid tossed the box down, splashing out its contents. money. a few paperclips. a rubber band. couple of bank bags. and a tin of soup.
"please," i moaned. "please don't take the soup..."

the little shit hit the concrete running. he was tearing down the street.
he was like greased lightning.
in one fist, a bundle of notes and the jangle of coins in his jacket. the hood, though pulled over his head, revealed a grin set firm against his face.
in the other hand, gripped like a big fuck you against the world, was the soup.

i've been jacked a few times.
it's nothing new.
i rolled over inside my shop and spat some blood. dug around inside my mouth a bit to make sure no teeth were about to come out.
rolled up on my elbow as another customer came in.
"jesus!" he cried. "you okay? i'll call the cops!"
"wait," i grunted. "it's okay. no need to call the cops."
"did he get anything?"
i grinned through bloody teeth. "nah. he just took a tin of the soup."

he called himself gonzo.
he called himself that because he'd seen a movie and figured that made him hardcore enough. he broke into a few warehouses first, then moved onto houses before getting the guts to jack a little chinese shop. since then, he took it on himself to do as many convenience stores as he could.
the money in his fist felt warm and well-earned.
he couldn't figure out why i was defending the soup and not the cash, so he figured the soup must be worth something, only he wasn't yet sure who he should sell it to.
as far as he knew, no one bought secondhand soup.
he kept running a few blocks, a little surprised to not hear a cop in this neighbourhood. running from the cops was half the fun.
he thought he might have kicked me a little too hard. far from giving him a spark of fear that he might have killed someone, he took comfort in the fact i might not be able to tell the cops who kicked me to death.
as he slowed, his breath coming in ragged gasps, he looked down at the blood on his pants leg and realised he'd have to throw out another pair of pants.
disappointed, he waved down a bus and headed home.
unconsciously, he juggled the soup.

the kid made it home peacefully.
his roomies were out.
that was good, because he wanted to count his takings.
he sat on his bed, dropping the soup onto his pillow and dumping all the coins and cash out on the mattress.
slowly, because he wasn't much good at math, he counted the money he'd stolen from me.
it wasn't much. barely a hundred bucks, but then the little fucker didn't know i had a little vault hidden under the counter. he hadn't looked behind the stack of tampons.
i kept them there because most kids who held me up had a mortal dread of tampons.
no way they were going to touch them.
they always ripped shit out of my counter but never touched the tampons.
go figure.

pleased with his haul - he wasn't much of a worker was gonzo - he lay back on his bed and had a small daydream about using the cash to convince that chick who worked at the diner down the road to go to the movies with him.
then to dinner - maybe fish n chips.
then home for some biggedy bam on the bed.
he had a hard on still when he rolled over and found himself looking into the face of the soup.

gonzo drifted into the kitchen, juggling the soup.
he had to hunt around a bit for a can opener.
found it, though.
the opener sliced easily through the tin lid and gnawed cheerfully around the edge, opening it up nice and easy.
gonzo was quite proud of his tin opening skills. when he was little, his mother used to get him to open all the tins. he'd do them with one go, never letting the opener pause or slip. just zam and it was done.
open sesame.
he took off the lid and tossed it into the sink.
looked inside the tin and hello.
that, thought gonzo, looks yum.
funny enough, that's what the soup was thinking, too.

the lights in the kitchen flickered.
a few bugs rippled against the flyscreen trying to get out as though they could sense the soup and wanted nothing to do with it.
the ancient pot on the stove cradled the soup and brought its temperature up.
gonzo smsed the chick from the diner.
he told her he had the most amazing soup he'd ever smelt. he was cooking it right now. she just had to come over and give it a taste.
he truly wasn't thinking of anything else by this stage. the thought of fucking was completely absent, even when she texted back that he could go fuck himself because she wasn't stupid enough to fall for that shit.
he just shrugged and began pouring the soup into a bowl where it steamed and gave the filthy kitchen an aroma so fine the kitchen itself would have fainted had it been alive.
it even killed the aroma of the bin which had been in the kitchen for some five days.
gonzo stared at the soup.
for a second, he thought it moved.
but that, he reasoned, would be stupid.
he grabbed a spoon and headed to the television room.

gonzo lapped up the soup like a starving dog, shovelling it down with gusto.
he didn't really know what was on tv. he wasn't really paying attention.
he kept his mind and his mouth focussed entirely on the soup.
that's probably also why he didn't hear me kick his back door in.

i settled in on the couch next to gonzo.
he didn't notice straight away.
he was busy sitting back with a peaceful smile on his face. he'd just tasted of nirvana, after all, and i'm not talking kurt cobain.
although, now i think about it, he had a lot more in common with the very dead kurt cobain.
or he would.
in a few minutes.
he turned his head, slowly, the smile still on his face.
"hi," i said.
"hi," he said, like an addict halfway through a good trip.
"i just wanted to be here," i told him.
"okay."
"i don't usually. it's not a pretty sight. but, you know," i wiped my lips where i could still feel the blood dripping from where his boot took me full in the mouth. "i felt i owed you one."
"cool," he said.
i turned the channel to something a little more interesting and waited.

the soup looked around.
it wasn't terribly happy about being inside gonzo.
but it was looking forward to getting out, that's for sure.
as any prisoner could tell you, getting out was always more fun than getting in.
the soup sniffed at a corner of gonzo's gut.
something didn't smell very good that way, so it sniffed at another side.
not quite what the soup was looking for.
it sniffed a little to the right.
aaaah, thought the soup. there you are...
and without further ado, it began to eat.

gonzo shuddered on the couch and his eyes bulged while his jaw clenched firmly shut. blood flowed freely down from his ears and nose.
he jerked.
he retched.
he tried to say something like "what the fuck is eating me?"
his fingers clawed the couch.
he made some moaning noises, none of which would keep me from sleeping as inside him the soup crunched his bones and minced his meat, dissolving it all down and slurping him up with a truly bizarre assortment of moist sounds.

i picked at the popcorn i'd brought with me, and then set an empty tin on the floor at the foot of the couch.
the soup rippled under the kid's skin, filling him up inside, soaking up the bones like bread soaks up, well, soup.
it was like a big pressure wave was building up under gonzo's skin. he gurgled as he seemed almost ready to burst and then with a loud and wet pop he just collapsed into himself leaving only the small blob of the soup and a few spots of blood sitting on the couch next to me.
i looked down at the soup and smiled.
what's on tv? asked the soup.
i shrugged. "nothing worth talking about. but i got us out a dvd for later."
i showed the soup the cover.
the blob? the soup chuckled as it rolled off the couch and slid up the tin to curl up inside. looks like someone i know.

at the shop, i leaned on the counter, watching the blob on a small mini dvd-player.
beside me, a tin of the soup sat quietly watching the blob eat a cinema full of people.
it didn't giggle, but i knew it wanted to.
the door jingled as a customer came in. i popped another piece of popcorn into my mouth and reached for a can of coke.
"hey, asshole," the customer hissed. "gimme the fucking money! now!"
i looked up.
"please," i said. "please don't take the soup..."


Liked this story? Throw me a Coke via my Tip Jar!