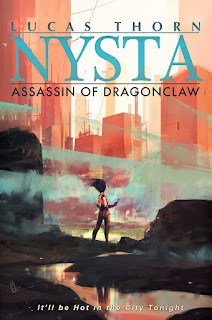 Sometimes, I get depressed.

I've often struggled with depression. I think a lot of us do.

For me, one of the things which has constantly troubled me at 3am is the fact I have worked hard over the years on various artistic paths, but never really succeeded. Never broken through. I used to do art in high school, but I was fortunate enough to have Shaun Tan in my class. That'll break your spirit real quick as you can't help but measure your feeble talents against such a monolithic creature as him and realise you're pretty much ever going to go far with a brush.

I have dabbled in photography (prior to digital) but was unable to continue after school because I had no access to a dark room (I'm old). I settled on writing (it was relatively cheap). I went to Uni with a writing dream haunting my head, but I suffered from the conceit that I could be a writing GOD. I was young.

Eventually I was hit by a rational streak and recognised instead the importance of working hard. And I pushed my writing in directions I never thought I'd go. I persisted at it when depression threatened to crush my motivation. After releasing Revenge of the Elf, I was overwhelmed by how well it did. Even more so as I watched other writers who'd released books at the time never gather enough wind to publish a second.

I went through two. Three. And now I'm cruising into the 8th in the Nysta series. 9th in the overall Fnordic Arc.

Yet, I still feel depressed. I still sometimes lose my ego. I tell myself I'm too genre. I'll never succeed. I'm doomed to remain hidden in Amazon's gloomy basement.

Last year, I tentatively pushed my wings into an air I seldom fly in - Marketing. I submitted Revenge of the Elf to SPFBO. SPFBO is an amazing act of generosity by another monolith - Mark Lawrence, whose work in grimdark fiction has inspired many. He continues to inspire by generously giving space on his blog and time in his life to encouraging self published authors. Competitions such as this have helped lift some of the brightest stars from this gloomy basement. Truly incredible pieces of fantasy have been unearthed and discovered by readers because of it.

My own experience last year was a little underwhelming. Not due to him, but the blog I was offered to seemed disinterested in it then, so my book went unreviewed and unremarked. To be honest, I am not looking for glory. I'm happy to be involved. I'm even happy with a negative review, because I believe there's no such thing as a negative review which is honest. It's called criticism and, as an artist, it's often what we like to hear. For my ego, though, nothing was worse than a critical line or two.

This year, because I am writing a series, I couldn't submit another Nysta book. I only had Hemlock and Melganaderna #1: Trail of the Necromancer. And, after last year, I wondered if it would be worth it. I kind of dread the attention as much as I'd like it. And Trail of the Necromancer is as experimental in its prose for genre fiction as the Nysta series. It feels, for me, like a huge risk. My career, barely started, could end with a whip of a pen. 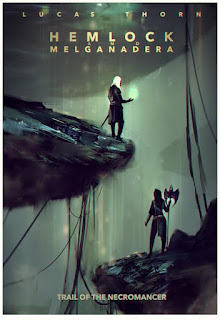 Feeling a little low, I got a quick note on my Facebook from MLS Weech, which announced Nysta #7: Assassin of Dragonclaw had been entered into a cover competition. Talk about blown away. The competition is to vote on the best covers for fantasy books released in May and, given what a job Amir Zand did on this one, I was absolutely chuffed to be a part of it and really happy his work was admired to such a degree.

Then today, Mark Lawrence has updated his own Cover Contest for SPFBO 2017 page with Pornokitsh's preference. Out of their group, they picked Trail of the Necromancer for the Cover Contest. To be chosen from 30 books blew my mind and made me drop my jaw. My ego is now having a hard time fit through the door. This has always been one of my favourite covers from Amir (I love green, and this one kind of reminds me of something from Frank Frazetta in its murky landscape). It's perfect that he's getting that recognition, too.

Now all I need to wait for is to see if the book can back up the cover.

If you've read this far, I recommend you go to the SPFBO page and prowl the authors there. Check out their work. There's an amazing collection this year. It seems each gets better than the last. You'll find something which will break your mind, I promise.