snail by eric dando - a review 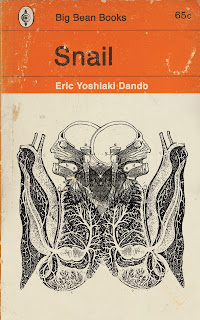 outside of fantasy, this is the book which influenced me the most. some of you might notice i don't use capital letters all that often in everyday writing (unless my phone auto-corrects me). when i was a writing infant just starting uni, i found this book.

if it hadn't been for this book, i would still be using words like "opalescent". i would be using only words with three or more syllables. my writing, before reading this book, was shit. total shit. the kind of writing your 12-yr old cousin writes and makes you read and you nod along and say how awesome it is but inside, you're bleeding. like, your soul is BLEEDING. and you don't want to be the one to tell that cousin their writing is really really REALLY bad, but you know someone has to. it's for their own good. that's how bad i was before this book.

this book taught me there's poetry in simplicity, and that even though the words you choose can be simple, their meaning can be just as deep and complex as anything which wins man booker prizes.

this book is about living in share-housing. there's drugs. there's bush-burning. there's hilarity and tragedy. if you remember that point in your life when you realised having flatmates was terrible and it was time to grow up, then you'll love this book.

if you've seen he died with a felafel in his hand and thought it was awesome, you should read this because it pisses all over that. this is the book which should've been made into a movie. not that one. eric dando was cheated.

i've been recommending this book to everyone i meet. anyone who tells me they want to write. it's been hard to get them to read it, though, because it's been out of print. penguin made one print run which sold out and for some reason decided successful australian books aren't worth reprinting and moved on. why? because penguin are, ultimately, jerks. finally, eric has been able to get it made into an ebook. finally, i can share this with everyone.

interesting fact: the guy who did the cover to this also did the cover to my sideline book you've probably not read, creepy and hatboy: the horror of drackenstein. the artist's name is matthew revert and he's a genius. creepy and hatboy, while not intentionally an imitation of eric's style, was heavily influenced by that phase in my life. it was episodic not because of eric, but because of andrew "chucky" hindle. we were writing a piece together, with chucky writing one chapter and i the next. only, my contributions raged out of control and i wrote two books before he even finished his first.

chucky, you're a loser.

anyway. if you want to read a book which has subtle fantasy elements in an urban way that doesn't involve anything really very fantasy, and you have ever lived with manic flatmates, you should read this. it's so worth it.