rebels in a literary class war: how contempt ignites pride in indie writers 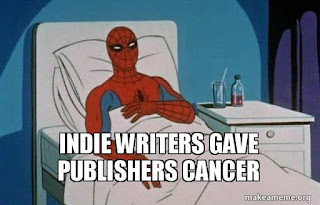 When I first imagined myself as a writer, I wanted to be the kind of writer who wins a Pulitzer. I didn't want to write fantasy, though I read it with rabid pleasure since I was 9. I wanted to write something literary. Road stories with deep and meaningful lyricism in the prose.

When I left home, I discovered that dreams don't pay bills.

Later in life, when I decided to pursue this writing thing as a potential career, I still couldn't shake the dream of winning awards. Only this time, I was hunting for Hugo. Or Gemmell. Something to validate myself as a writer. To let me know I wasn't just a hack. And I knew the only way to do that, was to be published by a big publisher.

For a while, I entertained this idea. I sent my books off all over the place. Penguin. Macmillan. Smaller publishers. I still hold onto one of my rejection letters from Macmillan which advised I was "too funny" to be published through them and recommending I pursue the market via England. There was then a request from the Macmillan reader to have the rest of the book beyond the extract I had provided so they could read the rest of it because they personally liked it, but wanted to assure me there was no chance they'd publish it.

I declined sending it. You want to read it, you can pay for it yourself.

Eventually, I tired of being advised to trim the violence and lose the humour. To turn the main character into a wounded fragile farmer and give her a redemption story. To make her an assassin in name only. And I decided to leap into the new world of Indie Publishing which has been made possible by the impressive efforts of Amazon.

I still don't think the literary community has fully grasped the future Amazon is offering. It's a future in which people like myself, who write stories for genres so small publishers are reluctant to print, will earn a living. It's something we never thought we'd do. I am at the moment making enough money to more or less stay at home and write. I am working a little only to afford to pay off some longterm debts I had. But if things improve as they have been, I won't need to work. I'll finally be what I wanted to be when I was 9. A fulltime writer.

The strange thing is that even though I've had a (very) modest financial success, I am still treated with utter contempt by the publishing community at large. Every day an article is released which condemns me because my books don't smell like dust and mold. Every day I read a snide comment complaining about the quality of my writing not being good enough. Every day I am treated like a beggar as though only my friends and family would buy my book (for the record, I left home at 15 and I'm mostly a recluse so I have neither of these things). Every day I am made to feel worthless and inferior to any other writer who's managed to earn a contract with a publisher.

To me, what's occurring is a literary class war. One which positions published writers as smug lords and ladies and indie writers as less than servants. We're the lower classes. The unwashed. The unclean. Our work is unpolished and our characters unmarketable.

We keep rising. We keep standing above published authors and gaining a quiet (very quiet) fanbase. It's almost as if fans of indie authors are afraid of speaking out. And you can see that sometimes in forums when a fan mentions an indie writer. Immediately, they're accused of being the writer or the writer's family. And while sock-puppetry is indeed a thing, it's not a thing reserved solely for indie authors. More than one published author has been caught doing the same.

I've had very few reviews. I'm not mentioned in any lists. Yet, I sell pretty consistently. I enjoy a steady rise of sales which proves to my mind the fact people out there do enjoy indie writers. Probably because we take risks. We're not afraid to be bold. Our work is the work of passion unfettered. It's the work of utter devotion to our own dream without interference or outside manipulation.

And it's often unique.

This is not to say a published author isn't as bold, but their books are more often chosen to appeal to large demographics. This is both a strength and a weakness. While some publishers (Angry Robot) buck this trend, the majority look to playing safe. And there's nothing wrong with that. There's really not. I'm not talking so much about skill as the marketability of the plot/character/stylistic choices.

As an enthusiastic reader myself, finding a gem in a haystack is an experience like no other. When you read a book which makes your heart pump, it's a gift from the writer to you. No matter how they were published. No matter how their book smells. It's a pleasure only you, the reader, can feel. One you should be proud to receive.

More of us indie writers are gaining the confidence which comes from success. While we may not be acknowledged and our works overlooked by blogs, podcasts, and magazines, we're getting where we need to be. Which is with the readers.

This class war, you see, isn't really about the writers. It's the readers. Every attack on ebooks is an attack not on the writers, but the readers who read them. It's an attack on their intelligence. Their taste. Every time an article proclaims a book is not a book unless it smells funny, it's insulting the reader who wanted a good story rather than a nasal spray. It's saying: You're not good enough to read our books.

It's snobbery at its most hardcore and only serves to reinforce the tired old stereotype of the literary writer with their nose in the air. Which I know is not how writers want to be perceived. They just want to be perceived as I did. As successful, and respected for what they do. Respected for their art. But with every volley the marketing arms of publishers let loose, it undermines everything and ensures the dividing line between traditional and indie writers stays firm and clear in the mind of readers. Demanding readers firmly choose a side in a war over profits is cynical to the point of obscenity.

I would never ask people to stop reading published novels. Why should they? I love them myself. I love any good story. I don't care who wrote it.  And while I am often highly critical of the way publishers are reacting to the rise of indie authors, I'd never heap shit on the doorstep of a single published writer. Because they're not the ones in charge of this narrative any more than we are.

Mark Lawrence recently promoted many indie authors on his blog. It was a wonderful and kind gesture from someone who had no need to do so. It raised a lot of awareness for writers who have a hard time being seen through the veil being applied to the fantasy genre by publishers intent on killing ebooks. This kind of trade between the two sides is, in my opinion, the best thing that could happen. Because it encourages fresh blood and revitalises the old. It also encourages readers to open their minds to things they might have closed them to. Which is only a great thing as it might encourage publishers to take more risks. 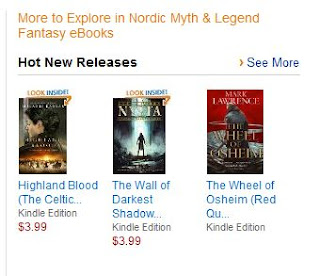 So, before you take up your flag and start planting it on one side or the other, give thought to the kind of dialogue you're encouraging between readers and fans. We already have the Hugos, so isn't one miasma of self-righteous grandstanding enough for our genre?

If you really want to be a rebel, then tell a new kind of story. One for all of us. In this way, we'll all feel proud.

(For the record, I did not get mentioned on Mister Lawrence's blog. But Amazon did declare me as hot as he was. And I have the photo to prove it.)