the scion of dragonclaw - prologue 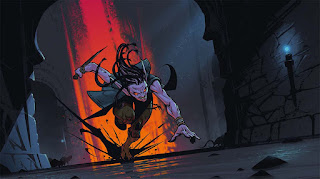 I hope you have a very safe and wonderful holiday. If you work in retail or customer service, I hope you have time to recover yourself afterward and I do remember the Hell you are going through right now. Look for the light, my friends. And I hope 2018 brings you a chance at a better job, or at least an apocalypse which rains down righteous death on all your customers and management while you get to stand in the crater and laugh.

As a reward for your love of my books, I present to you a gift. The gift of Christmas.

Here, the Prologue to Nysta #8: Scion of Dragonclaw.

May it give you a braingasm. 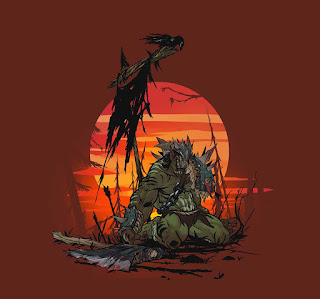 Tidal mockery for wave upon wave of the ork’s fury to beat upon.
Eyes shining as he stared at the ork without blinking.
Still said nothing.
Not even when the ork pushed himself from his stool and loped across the room. Bare green arms bulging as he flexed and squeezed fists so tight the knuckles popped.
Ground his teeth.
Snarled at the gap-toothed man with every step. Jaw rolling around his tongue.
A predator homing in on smaller prey.
And the whistling didn’t stop.
Huge shadow fell across the drifter. Covered his weasel face in darkness.
“I’m gonna fuck you up bad, little man.”
The ork reached.
Not fast.
He didn’t expect resistance. Fingers trembling rage, they sought to grab the whistler by his throat.
But the drifter moved as the whistling stopped.
Off the stool like grease. Slid under the ork’s heavy arm. A blur of catlike energy. Had drawn both knives in the same movement.
Coat flapped in his wake.
Twin flashes of light like ribbons of steel.
Blur of coat.
Darted around the ork’s second swing and slid smoothly across the floor to end up just out of reach.
Crouched. Head down. Eyes half-closed.
Hands low.
Knives in fists.
A fighter’s stance. Still and unmoving. Bold and bursting with unspent power.
Solid.
Unbroken.
Wet knives drooled carnage to the floor.
The ork glanced to the knives.
Then down at his guts.
“Aww, shit.”
Took a tumble toward the waiting drifter.
Still reaching for the drifter, the ork’s fingers met a laconic swipe of blade.
Four heavy digits dropped to the ground, and the big ork dropped with them. Wormed onto his back. Tried to hold his belly on the inside. A futile dream he’d never grasp.
He knew it.
Slick red fluid hissed from twin cuts racing across his abdomen.
The gap-toothed drifter looked around the room, grinning at stunned expressions. Like he expected applause.
No one had ever had to help defend the ork before.
They didn’t know what to do.
Mesmerised, they watched the gap-toothed man drag a chair. Scrape of wood across floor like the echo of a scream. Set it beside the dying ork.
Slumped into it.
Squirmed to get comfortable.
Then lifted booted feet to place them on the ork’s shuddering chest.
“And now, my friends,” he said at last. Voice cheerful and bright. “It is time we get to know each other very well, I am thinking. You know, my sister used to say it is good for strangers to meet. I know she would be very proud of me now for making such friends as you. Yes, I feel this is true. Come. Drink. Drink and share everything you know about these good streets of yours. Who is in charge of all the gangs? Are the Shivs still toughest? Which guards will take bribes. Which will not, and where are their families living? Where is a good bakery? A good bakery is a sign of great civilisation. I tell you this, and it is true. Especially when that bakery is one which sells spiced rolls and has a beautiful girl to serve them with sweet sugar-dusted fingers. Also, where to get a good coat. One without a hole in it or blood on its back. And a pair of new boots. And why is there no drink in my hands when you have been told to drink? But, most of all, and this is very important to Eli, he wants to know who has seen an elf. An elf with a scar right here on her mangy twisted face…”


Pre-Order Nysta #8: Scion of Dragonclaw
Only on Amazon Kindle