nysta #8: scion of dragonclaw up for pre-order! 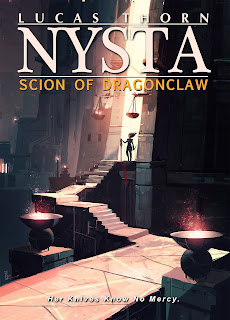 Those of you following my Twitter or Facebook would be well aware that I've thrown Nysta #8: Scion of Dragonclaw up for pre-order!

I have given a release date of January 3rd 2018, and I hope you'll all be looking forward to it.

You can Pre-Order here.

So, what's it all about?

When I was writing this book, I wanted to do something a bit different. I knew I wanted to up the bodycount. And I wanted to do it in a way that didn't make it repetitive and boring. So, I began playing with Point of View, which is something I normally shy away from. But, with Scion of Dragonclaw, I think I found a nice way of doing it.

I was also getting over a terrifyingly horrible job full of toxic management monkeys, and I really felt a need to say something about that. To say something about the very condition of having a job in an environment where your job is being off-shored while management smile at you in the face and stab you in the back. Where they'll push you on with a cowardly pretence at caring rather than have the balls to just tell you to fuck off.

Many of you have felt that. Whether you're being pushed along because you don't quite fit in, or they just want someone cheaper. You know what it feels like. I felt really strongly about this because the job I had was rather specialised and the implementation of replacement was being done with particular ineptitude which essentially insulted both my intelligence and the work I had been doing for them. I put a lot of effort into that job. I was forced to delay Nysta #7 because of it - a choice which ultimately cost me a lot of money.

So, this book rages at that in a way which isn't preachy. It is instead as much a character assassination as it is a story about assassinations. It is a joke. A pun of epic proportions. And, I hope you can see someone you know in these pages and feel delight when they fall to the slashing blade of Nysta.

Elsewhere, I'd like to point out the amazing cover, once more done by Amir Zand, whose work continues to explode my mind. This one is just glorious. Pay particular attention to her holding a severed head. Very drippy and red.

This leaves me to the final part of this post where I ask if you've read the books to consider sharing your opinions (good or bad) on Amazon, Goodreads, Facebook, Reddit, SFFWorld.com, or your favourite blog or review page. Wherever you hang out with like-minded fantasy peeps. I'm still a struggling writer living on lint which I pull from my pocket and sell to passing mice.

I don't own my own home (can't afford a deposit or a mortgage), and I depend entirely upon my wits and my wife. If it weren't for her, I'd have 2-minute noodles every night instead of 3 out of 7. So, every sale really helps me toward my goal of one day buying her some new boots.

Also, I have a PayPal account if you loved my books enough to think 3.99 is a cheap price for the kind of entertainment found in your average Netflix hallway scene (God, the Punisher was AWESOME!). I thank you in advance and can't tell you how much it actually means to me.

Lastly, thank you to everyone who has supported me or bought one of my books. Thank you for taking the chance on an Indie Writer Hack. I hope 2018 is the best for you and you enjoy my books!