nysta #6: sea of revenants - the inspiration 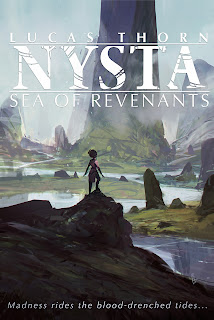 I'm still plodding away with Nysta #6, and it's coming along nicely. In case you haven't heard it yet, you can still listen to unedited versions of the Prologue as well as the First Chapter as read by the inimitable EdPool here. It's well worth the hilarity.

For the record, viking sails were made of wool. I googled that shit before I wrote it...

Which brings me to the reason I'm writing this little post. Influences. When you're writing the 6th in a series, you're looking around for inspiration in some remarkable places. Sure, I was lucky to have already written this book inside my head (actually, I'd written it almost halfway through), but I still needed something to help with the overall feel, and some of the side-stories for characters getting involved.

For example, I've roped in an ork who is a returning character whereas he wasn't there in the first draft. In fact, he was actually in the first draft for Nysta #4, but I replaced him with Hemlock and Melganaderna. In this one, he's replacing what was a small mob of unruly pirate-themed goblins because I didn't want to overdo the goblins by having them in every book.

This meant changing so much of the original story to fit him in. Which meant hitting the drawing board...

I knew with this book that I wanted a more pirate setting. Originally, I had a more Caribbean feel but, and this is true, I'd written it long before Johnny Depp impressed us all. So, I had to throw that out because I didn't want to be accused of ripping it off. Wondering what to replace it with, I thought of a documentary I'd just watched on vikings. And it made me think of how they'd go off for seasonal raids and I wondered if that'd work here. Perhaps my raiders lived in an archipelago and floated south to raid Rule's kingdoms in the summer. And perhaps they were kept safe from Rule's ships by an ancient power living in the sea off the coast.

Which, of course, led me to Lovecraft.

Originally, I didn't have much in the way of horror. Or Lovecraft. But I decided I wanted to get a feeling of madness to this ancient power, and then I thought I might as well just slap some Lovecraft in anyway. Not too much, because I don't want it to BE Lovecraft. But just enough to give it colour. Feel. And it gives the added bonus of seeing Nysta in a world she hasn't been before. Still a little out of her element as she heads to the joyously urban and ruthless city of Dragonclaw.

Bringing back draug was a no-brainer, but I thought I'd add a twist to it. And make them draug of the sea, as they are in many Norse legends. I was inspired a little by this website, which listed some Norwegian creatures. While I'm not going with their description, it was a platform for thought...

I spent some time brushing up on the Cthulhu mythos, of course. More to look at how Lovecraft described his architecture than anything else. I had thought of having strange creatures in this book, but I decided against it, instead keeping the hints to the next books coming.

And speaking of hints, I've been looking forward to this book because it resolves one of the greatest mysteries Nysta doesn't know she's a part of. A mystery I've often placed in front of you in some ways. And I hope the payoff is worth it. It's something I was inspired to do by reading, of all things, a book on Nazi Germany and the evils that live inside us all. I'm reading a lot on this terrible era at the moment, for obvious reasons. I'm looking forward to introducing some of the Fnordic Lands' more powerful and influential organisations. Their versions of population-controlling military and paramilitary. With spies, assassins, thieves and brutes of all sizes.

Other things which I will nod to influencing me at the moment are the music of Tom Waits, Andrew Hindle's the Final Fall of Man series, and the Mack Bolan executioner series!

So, there you go. That's what I'm thinking about while writing this book. It's coming soon, I promise.

I hope you will enjoy it!

Finally, a quick shout-out to T.O. Munro's review of Nysta #2! Check it out! T.O. writes amazing articles with more thought than I can manage, which explains the genius behind a man who can slip a medusa into a European-influenced fantasy series without it being out of place! I highly HIGHLY recommend his series.